Consumers who use PokerStars’ sports wagering vertical, BetStars, to survey lines and place wagers in New Jersey noticed something different when they logged on toward the end of the day this past Friday. BetStars is no more. The site is now known as FoxBet.

Back in May, The Stars Group (the parent company of PokerStars) and Fox Sports announced a “first-of-its-kind national media and sports wagering partnership in the United States” that would bring the omnipresent Fox name to betting apps in New Jersey and other states with legalized wagering (along with free-to-play games in other jurisdictions).

FoxBet is anticipated to be soft-launching in Pennsylvania this week, perhaps even today. But as with so many things in post-PASPA sports betting, the Garden State is where the seeds have sprouted first.

(There is no Fox retail sportsbook at this time; FoxBet operates on one of Resorts’ three betting skins in New Jersey.)

As with bet365 launching several days ago, FoxBet presents a threat to the market share dominance enjoyed over the past year by FanDuel Sportsbook and DraftKings Sportsbook. In the case of bet365, there’s a global track record for success. With FoxBet, there’s a potential reach and name recognition that no competitor can match.

As New Jersey’s own Jon Bon Jovi sang, “It’s all the same, only the names will change.”

For all intents and purposes, there are no differences for users between FoxBet and StarsBet. The new site and app have a white/blue/gray color scheme, replacing Stars’ white/red/black. And of course there’s the FoxBet logo in the upper left corner.

Next to that logo are buttons for the other verticals: casino and poker. Both take you to PokerStars, not to a Fox-branded site.

Users with an existing BetStars account don’t need to change their log-in or password. On their mobile devices, they’ll just need to update the app.

FoxBet offers all the same deposit and withdrawal options as Stars:

In terms of markets and odds, this is exactly what BetStars was.

The only difference so far is in the promotions, where Fox Sports viewers will see some familiar faces: 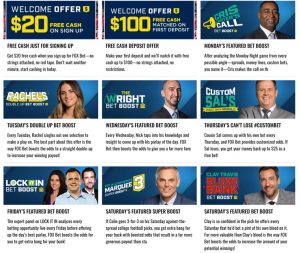 There are different daily odds boosts tied into the various on-air personalities at Fox, from Colin Cowherd to Cris Carter to the stars of the gambling-focused daily show Lock It In.

New users are offered $20 free cash to bet with when they sign up, plus a 100% first-deposit match up to $100. (You have to bet through the full $100, using bets with odds of -200 or shorter, before your winnings on the bonus money can be withdrawn.)

Despite having the built-in audience that is the PokerStars player pool, BetStars never got significant traction going in the New Jersey sports gambling market. (And it probably didn’t help that PokerStars hasn’t even been the top poker site in the state over these last 12 months of regulated online sports betting.)

Giving up that middling BetStars brand in favor of the new FoxBet name was a no-brainer.

Not only does the word “Fox” carry enormous mainstream cachet, but the marketing reach is staggering if the assets are utilized to maximum effect.

NFL season begins Sept. 8. Fox routinely hosts some of Sunday afternoon’s biggest games, with the Giants and Eagles on the network anytime they’re playing other NFC teams or visiting AFC teams. Imagine being a New Jersey-based fan of one of those teams. You’re watching the game. You’re into it. The commentators tell you that all you have to do is download the FoxBet app and you can start placing live bets on the game for real money. It’s the ultimate sports betting opportunity to generate an impulse purchase.

The FoxBet site is only a few days old and already this approach has been implemented. During live boxing on Fox this past Saturday night, the FoxBet odds for the main event between Erislandy Lara and Ramon Alvarez were shown on an on-screen graphic and referenced by commentators Kenny Albert, Lennox Lewis, and Joe Goossen.

There’s also Fox Sports 1 and Fox Sports 2 airing sports programming around the clock, able to plug FoxBet repeatedly throughout the day. Lock It In will presumably start using — and promoting — FoxBet’s odds and markets.

FanDuel doesn’t have the ability to reach through the television set like that. Neither does DraftKings. Or bet365 or Caesars or William Hill or PointsBet.

It’s an advantage unique to FoxBet, and one that could vault them to the top of the handle/revenue rankings within months — maybe even before the 2019 NFL season is over.