Regulatory approval imminent, but it could be months before implementation at first track 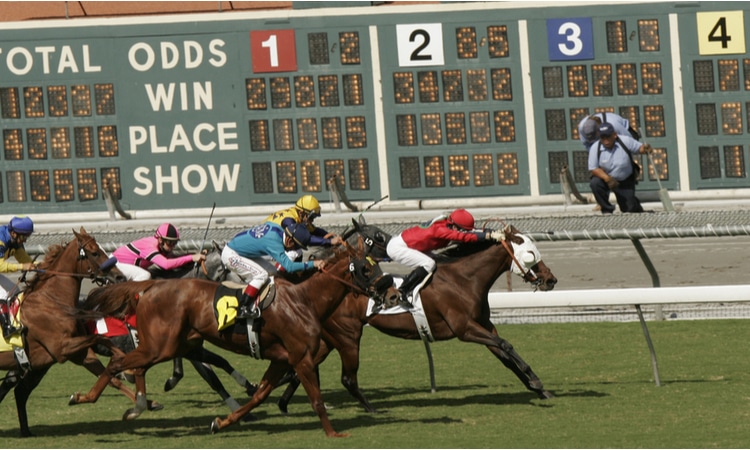 For more than 18 months, backers of bringing fixed odds wagering to New Jersey have been citing “soon, we hope” as a timetable.

With only one weekend left in Monmouth Park’s thoroughbred racing schedule at the Oceanport track, however, an NJ Online Gambling query to track operator Dennis Drazin resulted instead in a pivot to the “long game.”

Opening Day, Monmouth Park, May 2022: Can we be assured that there will be fixed odds betting available?

“I don’t think there’s any question about it — we already have the equipment,” Drazin replied while in Newark as a panelist Wednesday on the final day of Seton Hall Law School’s “Gaming, Compliance And Integrity Program Boot Camp.”

So with that out of the way, what could bring the new form of horse racing betting to New Jersey sooner?

Drazin said that he believes the final regulatory oversight signoff on fixed odds from the Attorney General’s Office is coming “within the next couple of days.” Dallas Baker, who is spearheading the push for Australian-based company BetMakers, said that upon final approval, fixed odds in theory could be offered “after a week’s worth of work.”

That’s too late for Sunday’s finale at Monmouth Park, but in October there are seven “Monmouth Park-at-Meadowlands” turf racing dates at the East Rutherford track that is much better known for its harness racing.

But if Drazin and Baker can’t — or choose not to — offer fixed odds for any of those race dates, that doesn’t preclude the possibility of the new wagering arriving sometime before spring.

For instance, it could happen during the Breeders’ Cup weekend of Nov. 5-6, when Del Mar Racetrack in California offers some of the best thoroughbred races on Earth, attracting gamblers from all over to wager.

“We hope to be able to launch fixed odds wagering sometime in the next several weeks to months,” Drazin said. “Hopefully it is weeks, but it could be months.”

The one thing that seems certain not to happen is either the Meadowlands Racetrack — which reclaims its track on Nov. 5 — or Freehold Raceway, which races on Friday and Saturday afternoons the rest of the year, jumping the gun on Monmouth and offering fixed odds.

“Right now, the harness racing industry is nervous about the cannibalization issue,” Drazin said, referring to horsemen’s worries about how fixed odds — which produce a lower takeout from the pool of wagers — might cut into profits from the more traditional parimutuel system of betting. “Whether they should or shouldn’t be, I’m not going to debate. They decided that they wanted to have Monmouth Park go first with the thoroughbreds, and then based upon the success or failure they see with that experiment, they would then react.

“I think you will see other jurisdictions start to take the signals and do fixed odds wagering, but right now, most of them want to see Monmouth Park get up and running and then they want to evaluate that.”

This is familiar ground for Drazin, whose horsemen joined in a legal battle in support of New Jersey sports betting in 2012 while the other racetracks and the Atlantic City casinos sat out the multi-year court skirmish.

End of a monopoly?

Drazin added that “there is talk about trying to expand the market” in a few years to allow for competition for 4njbets.com — currently the only online destination for New Jersey residents to wager legally on horse racing.

TVG currently offers the three racetracks a guaranteed annual revenue stream for those rights, Drazin said, so a change to the system would require such a stream that is equal to or better than the current deal. New operators would then pay the tracks a fee proportional to their share of the market.

The plan at Monmouth Park next year is to offer fixed odds only as “win, place or show” bets. Since more exotic bets such as exactas, trifectas, and Pick-6s produce about two-thirds of the betting handle, Drazin said that means only a portion of the remaining one-third of handle could transition to fixed odds should traditional bettors lose their appetite for parimutuel play.

The shift to fixed odds has gained momentum since the explosion of legal, regulated sports betting operators in nearly half the U.S. states once the Supreme Court opened the door in May 2018 for states to allow sports wagering.

Sports bettors skew much younger demographically, and Drazin noted that they already have become accustomed to the fact that they know at the time of their bet exactly what odds or point spread they are getting.

While the lines move as often in favor of a horse racing bettor as against them, Drazin said he regularly hears complaints from novice bettors who are suspicious that, for example, the horse they bet at 3-1 20 minutes before the race suddenly is 2-1 a few minutes later — and even-money just after the race has begun.

Fixed odds solves that concern, eliminating a potential obstacle to gaining a new audience — and generation — of gamblers.

Drazin added that fixed odds is a new wrinkle that can help racetracks become more competitive in bids to attract the gambling entertainment dollar.

“It’s kind of like an ice cream store: If all you’re selling is vanilla and chocolate, and everybody else has 20 or 30 other flavors, they’re going to go there,” Drazin said. “So you need to compete on a level that’s going to attract the generations as they come in.”