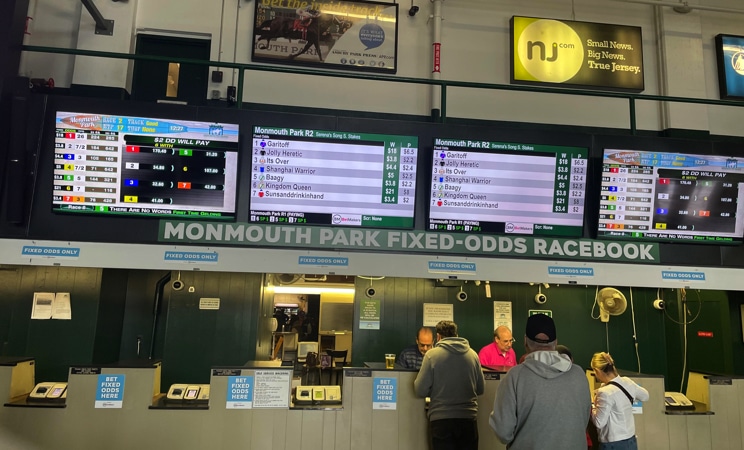 Welcome to the brave new world of fixed-odds betting, where you can make a wager on a racehorse at 100/1 at the very moment when the traditional parimutuel pool only is offering odds of 19/1.

That was my experience in the third race at Monmouth Park on Sunday, which was Opening Day both for the thoroughbred track’s annual summer meet, as well as the implementation of daily fixed-odds wagers at the track.

Chiquito Baby, the morning line longshot at 30/1, seemed to be treated like a different horse on the fixed-odds line set by Australia-based BetMakers compared to the betting public, which determines the parimutuel figure. So with the massive gap in perception clearly evident on the new, BetMakers-funded, $2 million video board on the infield, I decided to jump in at 90/1 with a modest fixed-odds bet.

But “fixed odds” doesn’t mean an immutable price, only that “the price you bet is the price you get.” And as it happened, the odds went even longer in the moments before my ticket was recorded — hence the 100/1 number. Almost immediately, the number began to slide, and went all the way down to 34/1 just before the race began.

The race was the second of three fixed-odds bets I made that, mostly through dumb luck, turned out to be better than both the final fixed-odds number and the parimutuel number. All three bets were losers, alas — even trying Changing the Karma in the fourth race only left me with a sixth-place horse.

Once the second race began, Chiquito Baby went wire-to-wire — as in, the horse practically limped out of the starting gate and never came close to chasing sixth in a seven-horse race.

That also had to be disappointing for parimutuel players, most of whom had wagered in the 20/1 range — only to see the final figure as the race began at 42/1, similar to the last fixed-odds figure. That would have been an exciting “sweat” had the horse shown any energy at all.

The race was a reminder that no matter how alluring the odds you may get, it does no good if your horse doesn’t win — or place or show, which, at least for now, are the only other two fixed-odds betting options.

Still, chats with a handful of fixed-odds experimenters revealed that they recognize the difference between fixed odds and parimutuel odds — and that the disparity only is sure to make a big impact for those betting four figures and up on a single race.

The sense of control with fixed odds eliminates that familiar feeling among horse players who can recall making a relatively large wager on a horse at, for example, 10/1 — only to have late money come in at such a volume that the horse goes off at 5/1. It’s still nice to win, but also frustrating not to be more fully rewarded for what the gambler recalls was a very good hunch.

The launch of fixed odds puts horse racing on more similar footing with sports betting in New Jersey, where a gambler can shop around for a better line on nearly two dozen sports betting sites.

BetMakers executive Dallas Baker — who hovered near the fixed-odds betting window in Oceanport on Sunday to make sure all went smoothly — noted that bettors were able to find value in the second race, where Kingdom Queen paid $18.20 to win in parimutuel odds, while a comparable $2 fixed-odds wager returned a closing price of $32.00.

In the fifth race, Hushion paid $17.20 in parimutuel wagering, with a $2 fixed-odds bet closing at $28.00. And while the favorites tended to be in sync on both lines, one favorite in a later race paid $3.80 on the parimutuel side, but $6.40 with fixed odds.

When a newcomer sees a horse for a moment at “3.5” on the fixed-odds boards and 7/2 on the parimutuel side — as happened at one point before the second race — it’s reasonable to believe that the odds are matched.

But Baker explained to NJ Online Gambling that 3.5 actually is the same as 5/2 because “you take a dollar off” on the conversion. So if one sees 7/2 in parimutuel, the matching number in fixed odds would be 4.5.

This hardly matters on the longshot side, where my 100/1 ticket — to pay $202 on a $2 wager — was listed at a price of $101. It’s something gamblers will need to factor in with shorter prices, however.

Baker and track operator Dennis Drazin said they expect to expand fixed-odds wagers to mobile devices within months, if not weeks. Other tracks also are expected to come on board, assuming things go smoothly at Monmouth Park. It may take longer to add exotic bets (trifectas and the like) to the ledger because those wagers make up the majority of the parimutuel pool, and many horsemen are concerned that fixed odds may cannibalize those pools.

Heavy rains forced the cancellation of Saturday’s scheduled Opening Day, wiping out a crowd that would have come to watch both the live card and the Kentucky Derby simulcast. Fixed odds only would have been available for the track’s own races, however.

Cool, blustery weather on Mother’s Day no doubt dampened that turnout, which partly is why bettors rarely, if ever, had to queue up behind more than two other gamblers at the fixed-odds windows. And if there were any “high rollers” in that group, none were willing to hint to a reporter at that level of wagering. But the big spenders no doubt are keeping watch on this grand experiment with wagering that has been commonplace for years in Australia and the United Kingdom.