Amani Toomer to help educate student-athletes about the risks associated with gambling, including legal sports betting. 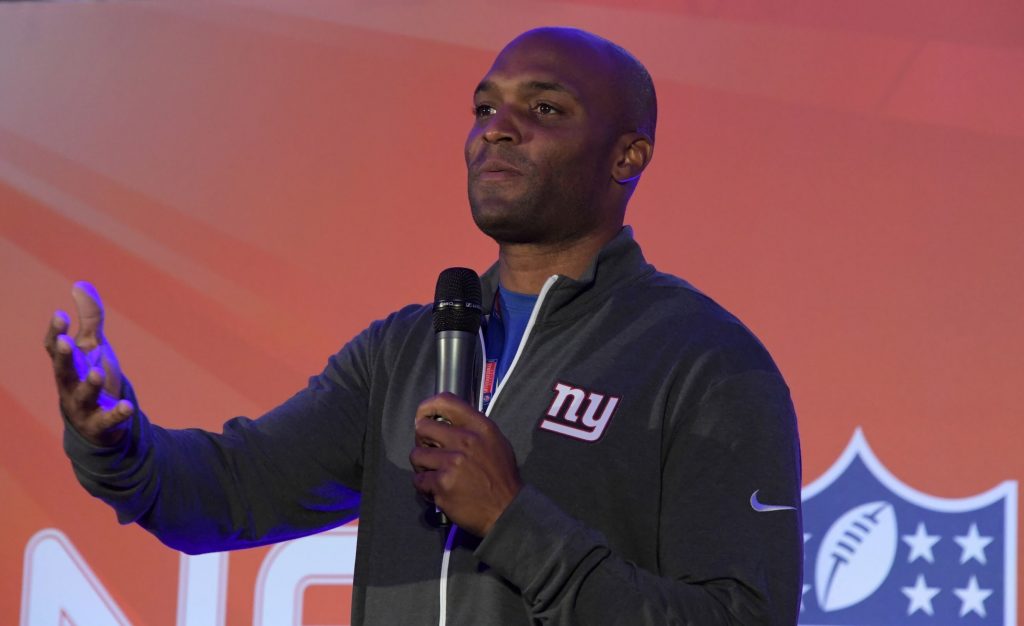 When former New York Giants wide receiver Amani Toomer was first approached about being involved in a foundation with London-based online gaming giant GVC Holdings, he was hesitant.

“I didn’t really know how I would fit in,” Toomer said at Seton Hall Law School in Newark on Tuesday.

But once he found out what his role would be, he became eager to join.

“I’ll be getting to go to colleges to speak to athletes about the pitfalls that might happen from gambling,” Toomer said.

That brought back fond memories for Toomer, 45, a member of the 2008 Giants Super Bowl championship team.

“When I went to the University of Michigan a long time ago, one thing the school did a really good job of was they told us about the consequences if we got involved with gambling — that we’ve got to be aware,” Toomer said. “These are young athletes who [need] information so that [if] they are approache[d] by someone, they have the right tools to [deal] with it.”

So Toomer is now on the board of GVC Foundation US, an offshoot of the global initiative of GVC that launched last month.

Toomer was a player — not a gambler

But like so many athletes, Toomer had less knowledge or interest in the gambling world than a lot of bettors seem to wish for or expect.

“The only time we would hear about the point spread is your coach is trying to motivate you,'” Toomer told NJ Online Gambling. “‘They think you guys are going to lose by whatever many points.’ And that’s like a motivational tool.

“But I’m telling you, I went into media after [retiring], and did NBC Sports radio for six years,” Toomer added. “They had to sit down and explain to me what the line meant — plus 6, I’d say ‘what does that mean?’ Who gets plus 6? I didn’t understand it. And I don’t think I was atypical. We really didn’t focus on it.”

“I thought they’d just [bet] that you’re going to win or you’re going to lose — I didn’t understand the concept of points, to be honest with you, until I got out. And then there’s ‘half points’ and all that.”

Toomer is now up to speed on point spreads, but the learning curve is steep.

Asked what he thought about the widespread popularity of in-game sports betting, Toomer replied, “I don’t understand how they do that.”

As for working with student-athletes, Toomer said he would pass along the advice he got about how to “read” when someone is trying to lure the student-athlete into revealing injury information, for example, that might give a bettor an edge in terms of the point spread.

While legal sports betting just became available beyond Nevada a little over a year ago, Toomer said it won’t much change the messages he’ll pass along compared to what he learned at Michigan.

“Gamblers have been doing this forever,” Toomer said of gamblers working with friends of athletes to get the athlete to accidentally let slip something about the likelihood of the banged-up quarterback playing on Saturday, for example. “Everybody tries to get an edge. And with daily fantasy sports, it’s not just about how the team will do any more.”

Former football players have fared extremely well on “Dancing with the Stars,” as the dedication, focus, and willingness to work hard until you get it right on the dance floor mirrors what the players did to make it to the NFL.

But the same group doesn’t tend to do as well with poker — though there are exceptions, of course, like Richard Seymour.

On Tuesday, Toomer provided a window into why that might be.

“I remember playing in a charity poker tournament,” Toomer said. “And I realized that the competitiveness of an athlete — it isn’t good. I’m sitting there playing Texas hold’em, and they give you two cards.

“Then there’s a river [flop] or whatever they call it, everybody is folding all the time,” Toomer added. “And I’m like, ‘Why are you folding — that’s quitting!’ So I’m bidding all the cards and losing, and I was out in like an hour.

“Everybody was laughing, so I figured, OK, this is something I should not be into,” Toomer said with a chuckle.

Martin Lycka, director of regulatory affairs at GVC Holdings, told an amusing story about his first encounter with Toomer.

“I was starstruck, so the only thing I could think to blurt out was that I was a lifelong fan of the New England Patriots,” said Lycka, referring to the team the Giants faced in the 2008 and 2012 Super Bowls.

“I fully expected Amani to take some guidance from his defensive teammates and just ‘blitz’ me straight away,” Lycka said. “But Amani, being the gentleman that he is, said, ‘Martin, there’s nothing wrong with that — I like the Patriots as well. If it hadn’t been for them, I wouldn’t have my Super Bowl ring!”