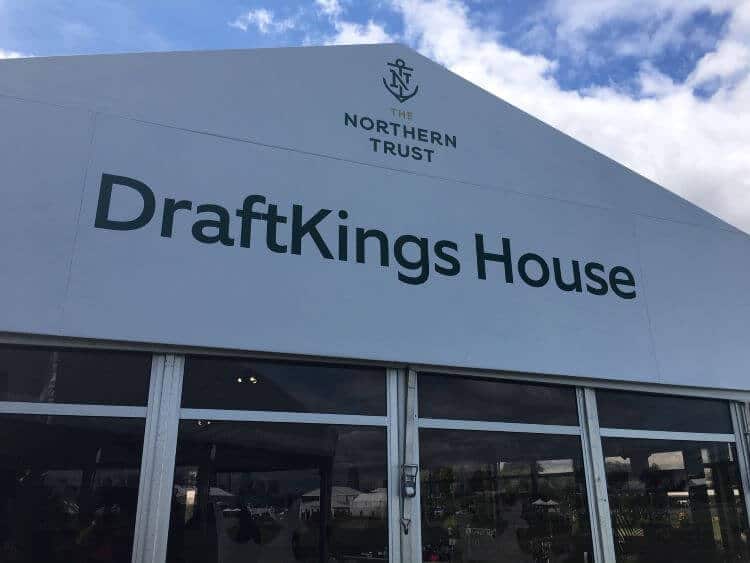 DraftKings launched its “official partner” status at Liberty National Golf Club in Jersey City Thursday in the first leg of the FedEx Cup’s PGA Tour playoff series, and the most noteworthy aspect was that it looked, well, just like any other traditional corporate partner.

Sure, there was the “DraftKings House,” located near the 15th green and the 16th tee. But the signage there matched not only other corporate attractions on the course, but also any such destination for any golf tournament in recent years.

That is, a legal, regulated gambling company’s presence at a major sporting event simply has gone mainstream.

(Even the separate, premium-access DraftKings tent was not out of the ordinary — save for the fact that it was home to the 40-player Fantasy Golf World Championship that features a $1 million first prize.)

Step right up and try a putt

Nor did the “DraftKings Money Putt” area look out of place at a PGA Tour event. Plenty of previous events have offered similar opportunities to, well, putter around.

Only if a would-be player inquired within would they learn that for a $500 deposit to a DraftKings account, a player could receive an instant $250 bonus for their effort.

(And if recommending at least a $500 deposit seems steep, keep in mind that Jersey City is home to countless Wall Street investment bankers. One member of a group of young professionals lauded the idea, noting that with the college football season around the corner, “We’re going to bet way more than that anyway.”)

As for the money putt, sinking that shot would triple said bonus, although the “pin placement” for Thursday’s contest was far from ideal — the hole was absurdly shallow and not quite on level ground. 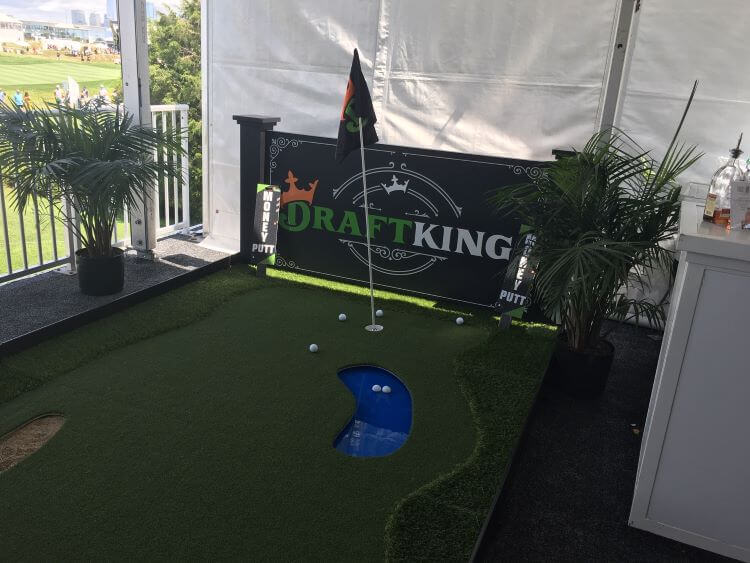 Njonlinegambling.com was told, however, that the placement at the “House” for Wednesday’s practice round was far more manageable, so perhaps that will return for the final three official rounds.

Supposedly, a dozen or so entrants had earned their bonus-tripling status as of lunchtime on Thursday in spite of said pin placement.

The official status of the tent area was a significant step up from our visit in 2019, when it took an intrepid interest in hiking the course to find a modest FanDuel setup near the 13th green. That occurred in spite of DraftKings already having secured a Tour partnership in the daily fantasy sports realm.

Last call for men’s golf in NJ for awhile

It’s unlikely that many in the crowd were aware of it, but there is a good chance that this was the last PGA Tour event that will be held in New Jersey for eight years.

Last week, the Tour announced that the tradition since 2007 of holding the opening round of the playoffs in New York or New Jersey (with the exception of 2020, when the event was in the Boston area) would end with this tournament.

This event — known as The Barclays through 2016 — will move in 2022 to Memphis, home of the FedEx company that sponsors the playoff series of three events.

With no event anchor to count on any longer, it appears that New Jersey will have to settle for hosting the occasional U.S. Open or PGA Championship “major” — The Masters and the British Open obviously are off-limits.

For those Garden Staters willing to make a road trip, however, the 2025 U.S. Open is scheduled to be played in Oakmont, Pa. (nearly 400 miles west of Jersey City, in the Pittsburgh area), and in 2026, the event is to be contested at Shinnecock Hills on Long Island (a more manageable 95 miles east of Jersey City — though beware the summer traffic).

As for the PGA Championship, the 2023 event is being held 325 miles or so from this week’s event, north of Binghamton, N.Y. In 2026, the PGA is just over 100 miles away in the Philadelphia area at Newtown Square, Pa.

If none of those travels seem palatable, then local golf fans will have to wait for the 2029 PGA being held at Baltusrol Golf Course in Springfield, a mere 20 miles to the west of Liberty National.