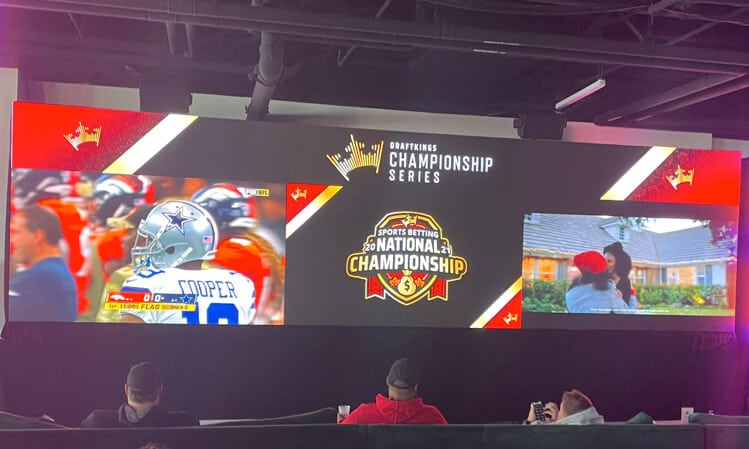 While few bettors would have gone so far as to take the Jacksonville Jaguars on the moneyline to shock the Buffalo Bills on Sunday, one savvy gambler rode the Jags’ side of the spread in a key parlay wager that clinched a $1 million prize in the DraftKings Sports Betting National Championship.

Winner “tus0323” hit a three-leg parlay of Jaguars +14.5 points, Jags-Bills game total under 49 points (Jacksonville won outright, 9-6), and the Denver Broncos +6.5 points in the first half against the Dallas Cowboys (Denver led 16-0 at halftime). The Bills were expected by most to run up a significant scoring tally against the previously hapless Jaguars, but they never even scored a touchdown.

Runner-up “jetsr2cool” wagered nearly twice as much over the course of the event as the $63,100 put down by the winner, but settled for $139,641.03 plus the $250,000 second-place check. Most of those winnings came from the Arizona Cardinals defeating the San Francisco 49ers, but jetsr2cool — who led after Friday night by making three successful “all in” bets — did not play any parlays.

Grant Neiffer, a contributor to Scores and Odds (a site owned by the same parent company as NJ Online Gambling) who appeared on the Gamble On podcast at the start of this NFL season, took third place under the screen name “gneiffer07” with a score of $109,478.06 — aided by four parlay wins. With his $100,000 in bonus money, Neiffer pocketed $209,478.06.

On the scene in Weehawken

There is plenty of play-by-play cheering on NFL Sundays at plenty of Vegas sportsbooks or the FanDuel Sportsbook at the Meadowlands Racetrack, so that might have been expected to be true in spades at this event in Weehawken on Sunday in the shadow of Manhattan.

But the dozens of bettors watching the first half of Sunday’s NFL action at the Envue Hotel were a relatively quiet lot — even though the stakes were a $10,000 “buy-in” and that $1 million first prize.

Of course, this crowd consisted in large part of professional gamblers and those wealthy enough to afford the stake — not to mention that after a betting-limit snafu on Friday, all entrants knew that even if their initial stake disappeared, they would wind up with a refund.

“We wanted to make sure the customers were content, and we felt that was the best option,” DraftKings bookmaker Johnny Avello told NJ Online Gambling as he watched the first half of the NFL early games on Sunday.

“What happened on Friday just kind of happened across the board for everybody, so we just made this decision,” Avello added of the remarkably low wager limits that numerous entrants experienced — leading to a wave of criticism on social media.

I love Draftkings and I always will.

But this Sports Betting National Championship has been an absolute embarrassment and disaster.

Avello said he understood that some bettors had planned to jump in with a late entry on Saturday afternoon if the top prizes seemed obtainable, but the Saturday morning ruling included a ban on such a tactic.

“There probably were some that were going to jump in, but because of that call, where everybody got their money back, we couldn’t let others in at that time, obviously,” Avello said.

The number of entrants needed to avoid an “overlay” was 445, and Avello acknowledged that the contest fell short on that front — even with remote entries added as an option this year in Pennsylvania, New Hampshire, Virginia, West Virginia, Tennessee, Michigan, Iowa, Colorado, Arizona, and Wyoming. The final tally was 215 entrants, a number that likely would have gone up on Saturday if the rules hadn’t changed.

By my estimation, DK lost $4,728,773 on the Sports Betting National Championship. #DKSBNC

This includes refunds for those that didn't exceed $10k, the prize pool, and the winnings above $10k.

This doesn't include venue and marketing.

I won't break it down by the minute.😎

According to DraftKings, 35% of the entries came from New Jersey, followed by Pennsylvania at 18%, Colorado at 12%, and Michigan at 11%.

In-person attendees were required to have a daily confirmed negative COVID test result obtained through an on-site testing provider — results from other providers were not accepted.

Last year’s planned contest was wiped out by the COVID-19 pandemic, after DraftKings had tried such a contest for the first time in January 2019 in Jersey City. That event was marred by controversy as well, and led to several changes this year: Total prize money was lowered from $2.5 million to $2 million, the number of sports available to bet on was reduced to just NFL, NBA, and college football, and all wagers had to be completed by 1 p.m. ET on Sunday.