At up to 20/1, is the Mets ace worth a flyer to become the second pitcher in 50 years to win NL MVP? 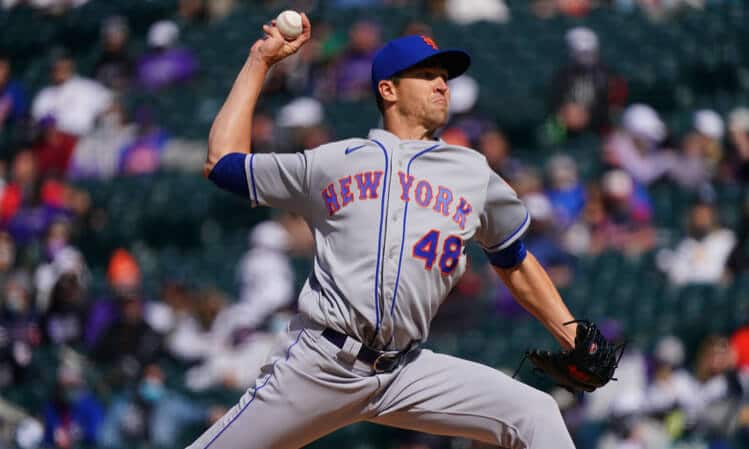 “M-V-P” chants don’t usually start up during April baseball games. Especially not for a pitcher.

But they’ve started for Mets ace Jacob deGrom. And he likes it.

After an absolute gem Friday night, in which he threw a 15-strikeout complete game shutout and also went 2-for-4 at the plate with an RBI, outscoring the Washington Nationals all by himself, deGrom said of the Citi Field “M-V-P” chorus, “That was definitely cool. … Obviously, it would be really cool to win MVP.”

Sports bettors who’ve backed deGrom for that end-of-season award surely think it would be “really cool” as well.

The 2018 and 2019 National League Cy Young winner is putting up absolutely absurd pitching numbers through his first four starts.

He’s allowed one earned run in 29 innings, good for an MLB-best 0.31 ERA. deGrom’s 0.55 WHIP is the second best in baseball, behind Milwaukee’s Corbin Burnes. He has 50 strikeouts, giving him a Ks-per-9 of 15.5, tied for the best in the majors, and deGrom has walked a measly three batters. Only two pitchers have a higher WAR, and they’ve both started five games to deGrom’s four; looking at the stat relative to games started, only Burnes equals deGrom.

You can make the case that Burnes has been just as good as deGrom on the mound so far this year (and Burnes is the second favorite for the Cy Young award at all major regulated NJ sportsbooks). And at the plate, Burnes isn’t bad either — for a pitcher. He has two hits in 10 at bats, with one run scored and two batted in.

But deGrom, a college shortstop who was converted into a pitcher during his junior year, is raking like Mike Trout. Yes, it’s a tiny sample size, but the Mets righty, who bats lefthanded, is 6-for-11 (.545) with a double, two RBIs, and three runs scored.

In Cy Young voting, deGrom’s bat skills are irrelevant. But for MVP voting? If he should finish the season hitting anywhere above .300, that gives a massive boost to his case.

Then again, MVP is partially dependent on one factor that the Cy Young isn’t: team success. Sure, a failure to score runs in support of deGrom will cost him official wins, but Cy Young voters have mostly evolved beyond viewing a pitcher’s W-L record as a key metric. For MVP, however, it makes a huge difference how your team finishes. deGrom’s MVP chances decline significantly if the Mets — currently 9-8 and narrowly ahead of the rest of the tight NL East pack — don’t make the playoffs.

A glimpse at the odds at several of New Jersey’s mobile sportsbooks shows deGrom is the clear favorite to pick up his third Cy Young, but still a longshot for MVP, ranked between fourth and 10th most likely to claim the NL honor (with Atlanta’s Ronald Acuna Jr. currently the shortest money):

PointsBet has the best return on MVP, with odds similar to where the other books were before deGrom’s masterpiece on Friday night. For the Cy, it’s PointsBet and BetMGM running neck and neck for best value. (For whatever reason, FOX Bet didn’t have NL or AL Cy Young markets posted on Monday morning.)

If he stays healthy and if converted reliever Burnes at some point plummets back to Earth, deGrom looks in great shape to snag the Cy Young.

But how realistic is it to expect a pitcher to win MVP?

In the AL, it’s not terribly rare, with six pitchers named MVP in the last 50 years. Half of them, however, were relievers, who tend to be viewed by voters as something more akin to an “everyday player” than starters are. Dennis Eckersley in 1992, Willie Hernandez in ’84, and Rollie Fingers in ’81 were all closers. The three starting pitchers to earn the award were Justin Verlander in 2011, Roger Clemens in ’86, and Vida Blue exactly a half-century ago, in ’71.

In the NL, on the other hand, only once in the past 50 years has a pitcher claimed the honor: the Dodgers’ Clayton Kershaw in 2014. Others have arguably been deserving — perhaps most notably Greg Maddux, who in 1995 posted a 9.6 WAR to NL MVP Barry Larkin’s 5.9, back before WAR was part of the common baseball statistical vernacular. Voters tend to be reluctant to back hurlers unless witnessing a truly historic pitching season or faced with a dearth of strong candidates among position players.

The latter is not tracking to be the case, with Acuna currently hitting .371 and tied for the league lead in homers. So deGrom will have to be historically phenomenal. An ERA of 0.31 would qualify. Even an ERA of 1.31 probably would.

Especially if it’s accompanied by a batting average higher than Acuna’s.