If the prelude to the upcoming $15 Million Summer on WSOP.com was any indication, then Nevada and New Jersey online poker players are in for quite the treat.

The first major MTT series (Coast 2 Coast) since NJ, NV, and Delaware began sharing liquidity was an unmitigated success, with several events setting new precedents for the legal US industry.

Were the prize pools on par with those seen on the bigger international sites? No, but they do signal a bright future for major MTT series should just a few other larger states enter the mix.

Coast 2 Coast: by the numbers

And it blew that number away. In total, just under $1.4 million in prize money was doled out, with just a single event posting a smallish overlay. Fourteen events breezed by their guarantees by 40% or more.

These figures are particularly impressive given that not all the tournaments were exactly amenable to working players, especially those living in NJ. To expound, a swatch of weekday tournaments didn’t get off until 9 pm EST. Couple this with the long late-reg times and it wasn’t totally uncommon for MTTs to last until 4 am.

One gets the impression that the Coast 2 Coast was a sort of live field test for the upcoming Online Championships, which will overlap with the live World Series of Poker and is WSOP’s flagship series.

Given the performance of Coast 2 Coast, it wouldn’t surprise if that series offers a multi-million guaranteed prize pool.

The Coast 2 Coast series marked the first time that players really felt the impact of shared liquidity between New Jersey and Nevada poker sites on the MTT front.

Yes, the NJSCOOP and NJCOOP on PokerStars NJ feature larger series guarantees, and generate larger prize pools, but they also consist of far more events. A look at the average prize pool per tournament for a few recent NJ series paints a more accurate picture. 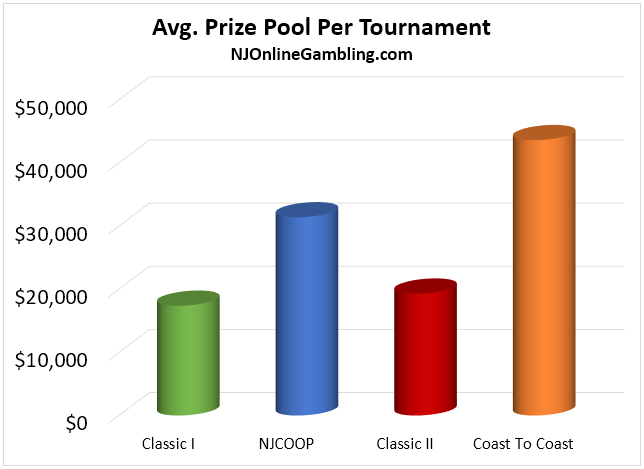 Projecting the Coast 2 Coast numbers over an 80-event series yields a $3.5 million prize pool, which would be far and away the largest in industry history.

What’s next for WSOP.com?

Traffic on WSOP.com should ramp up significantly over the next week, reaching an initial peak around the Colossus (June 4) and hitting a fever pitch right before the Main Event in mid-July. It’s not uncommon for online traffic to spike 40% during the summer, due primarily to the waves of poker tourists that park themselves at the Rio.

These spikes may be even more pronounced this year, as for the first time New Jersey players will be permitted to join in the fun. $15 million worth of guarantees, including access to four online bracelet events, should prove compelling enough to drive even some long dormant NJ players back to online poker.

On a downbeat, the exceptional Coast 2 Coast numbers may have been driven mostly by hype — after all, shared liquidity did just go live a few weeks ago. In the long run, players may demand better scheduling and site improvement before they click the “Deposit” button.

But at least for the next few months, attendance records for cash games and tournaments should fall on a near weekly basis. Enjoy the ride.