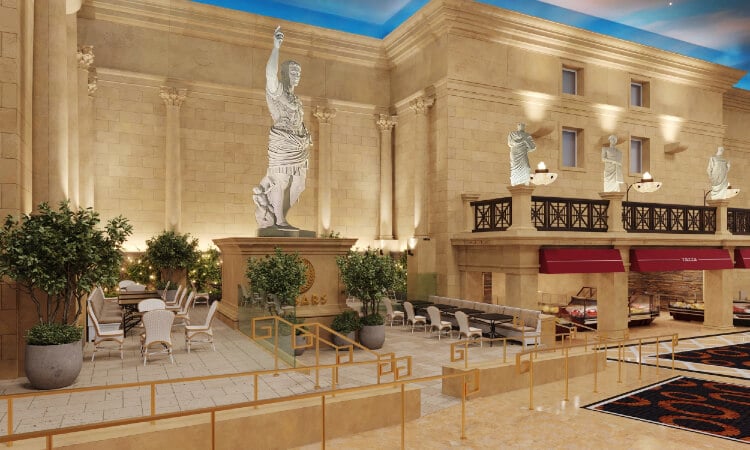 For 15 years, the adjoining Caesars and Bally’s casinos on Atlantic City’s Boardwalk were “teammates,” as both were properties of the Caesars Entertainment parent company. But two years ago, that parent company sold Bally’s to Twin River Holdings of Rhode Island, as Caesars Entertainment was in the midst of purchasing Tropicana farther up the Boardwalk.

Part of the premise for approval by state regulators was Twin River’s promise to spend what has become a full $100 million in upgrades on the outdated Bally’s property. That process has been going on for more than a year, and on May 26, Bally’s officials celebrated the grand opening of the Carousel (slightly) rotating bar and of the outdoor portion of The Yard, the company’s new beer garden.

Of course, all this had to be a little awkward for Caesars Entertainment, which would risk losing customers to a revived Bally’s next door. So the company will now try to one-up its orphaned rival, with announcement of $200 million in upgrades at its namesake Atlantic City casino.

‘Bringing the best of Las Vegas to Atlantic City’

According to a press release, among the additions will be Nobu Atlantic City, described as “a restaurant and distinct hotel experience within Caesars Atlantic City’s hotel with floor-to-ceiling windows offering views of the beach and boardwalk; reality TV show chef Gordon Ramsay Hell’s Kitchen, which is the first restaurant of its kind on the East Coast; and just-completed upgrades to 750 rooms and suites in Caesars’ Centurion and Ocean towers.”

The Nobu brand will be part of the top three floors of the Centurion Tower and will feature redesigned rooms and suites with “Japanese-inspired decor.”

“Caesars Atlantic City set the standard for extraordinary experiences in the market, and we are thrilled to continue that legacy by reimagining the property from the moment guests step through the doors,” John Koster, regional president for Caesars Entertainment’s Eastern Division, said in a statement. “This major investment demonstrates our ongoing commitment to elevating guests’ experiences at our resorts, as well as advancing the Atlantic City tourism economy.”

Caesars Atlantic City executive Joe Lodise even went as far as saying that the new Caesars would become “one of the country’s leading travel destinations here on the East Coast — bringing the best of Las Vegas right here to the center of the action in Atlantic City.”

Other upgrades will include renovated valet and hotel lobby areas, with the latter featuring a Starbucks that will offer mobile ordering. In addition, a new “pool experience” on the rooftop of Qua Baths and Spa will include two levels of seating with modern lounge chairs, daybeds and cabanas, and a bar overlooking the beach and boardwalk.

The dueling upgrades could be good for both casinos, as well as for the six-casino Boardwalk, which has no doubt been losing customers to the luxury of Borgata in the Marina District. And there’s nothing to stop visitors and guests of one Boardwalk property from enjoying the upgrades of another. A pre-meal drink at the Bally’s Carousel bar — there’s even a new drink called the Merry-Go-Round — could pair nicely with a fine meal at Nobu next door, for instance, to be followed by dancing outdoors to live music at The Yard.

Bally’s, like Caesars, has upgraded 750 rooms and suites in hoping to entice customers who may not have been satisfied with a prior experience. Nearby, Hard Rock’s nearly 2,000 rooms and Ocean’s nearly 1,400 rooms are only four years old, and Tropicana is getting about one-fourth of the $400 million total that Caesars Entertainment is spending at Caesars, Tropicana, and Harrah’s in the next 12 months or so.

Even Resorts — the Boardwalk’s smallest and oldest casino at age 44 — has spent tens of millions on upgrades in the past few years. This all adds up to what should be an improved visitor experience, no matter which casino hotel is chosen.