Bovada to completely exit the Empire State later this month 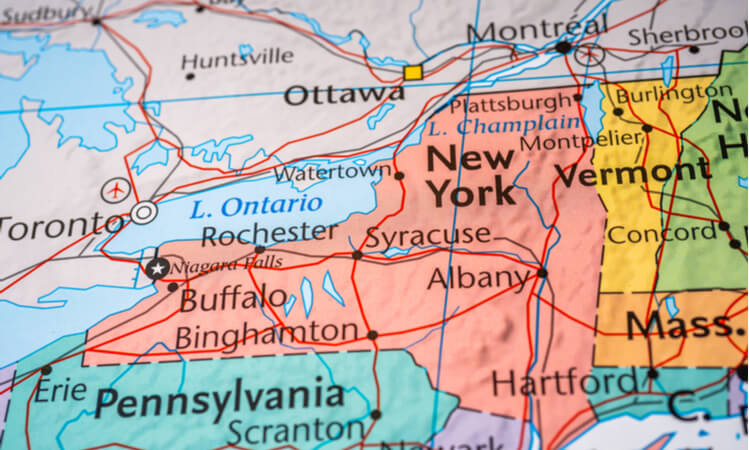 In Bovada’s place would likely come industry giants like DraftKings and FanDuel.

The last bets on Bovada will be taken June 20. New Yorkers may use existing funds in their accounts, but they cannot make new deposits or bet on an event that will settle after June 20.

Bovada just sent out an email to everyone in NY with accounts that it’s stopping all transactions for NY residents in June 21 because of new legislation that it says is too restrictive. I would never have an account or gamble on sports but here’s the email. pic.twitter.com/BrzRTgyAzY

New York plans to rely on online sports betting for as much as $500 million in annual tax revenue. An offshore website like Bovada could have been a prime target for New York State to shut down through a criminal complaint with state-sanctioned sports betting up and running.

The timing of Bovada’s withdrawal could come just days before an official draft of the New York online sports betting regulations will be made public.

Sports betting isn’t the only product offered from Bovada. The site is No. 5 in the world in terms of online poker traffic, according to PokerScout. It has less than 20% of the traffic of PokerStars‘ global platform, but it’s still one of the most highly played poker websites.

Bovada’s website states that it’s “the No. 1 online poker room in the United States.” Just a handful of states have legalized online poker and none of their respective operator traffic rivals Bovada’s global traffic, though it’s unknown how many U.S. players the site has.

Bovada filled the void for some players after online poker’s Black Friday in 2011.

Some New Yorkers will look for new online poker options. New York State in years past considered legalizing and regulating online poker sites, but those efforts fizzled out. Eventually, sports betting became the hot new casino gambling game and the state went with that instead.

Neighboring New Jersey and Pennsylvania have both online sportsbooks and online poker sites, licensed and regulated by the respective states. The dynamic should eventually lead to New York picking back up its online poker discussions, and possibly online casino games such as blackjack and slots as well. Sports betting is relatively low margin compared to those games.

What Bovada customers need to know

Bovada provided bettors with more information on the status of their accounts. It’s a tricky situation as many sports bettors wager on futures and other events that won’t settle in time for Bovada’s withdrawal. The good news is that players will be able to cash out.

The gambling platform provided the following information in an email to players: 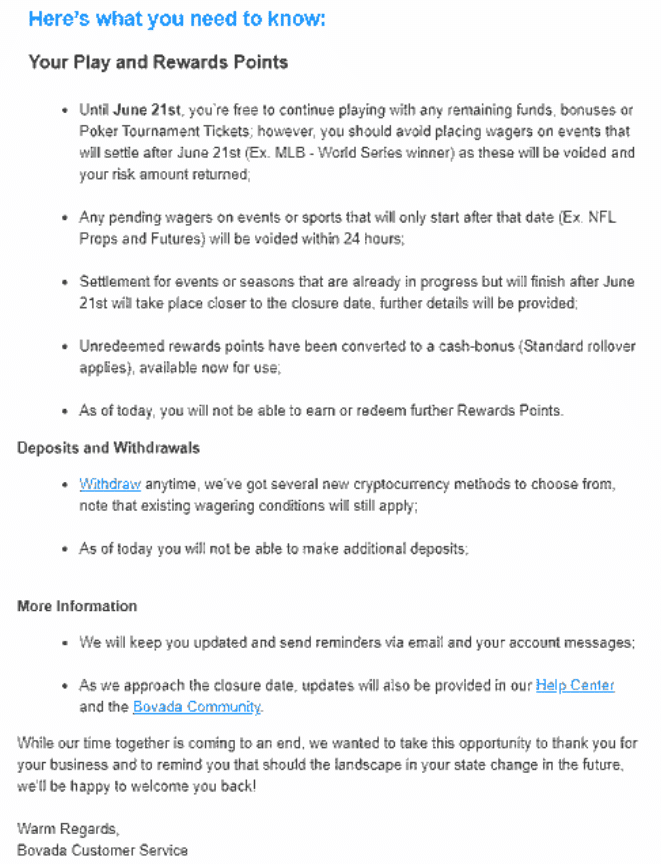 What’s next for Bovada

It’s unclear if the gambling site will pull out of additional states following its exit from New York. Continuing to operate without regulation in other jurisdictions risks prosecution for violating various state gambling laws.

While 5Dimes, another prominent offshore gambling website, is seeking to find an entry into the legal and regulated U.S. market after ceasing its unregulated offerings here, Bovada has not yet indicated a similar intention.

So far, fewer than half the states in the country have legalized online sports betting, and only a handful have authorized online casino.

[Note: Betting or wagering is not permitted with operators who are not licensed in your state. Please check your local rules and regulations.]