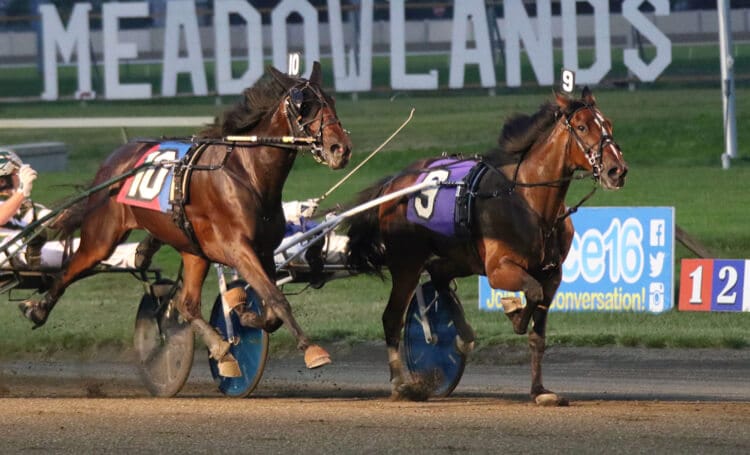 Richard Banca, banned by Meadowlands Racetrack officials more than five years ago, pled guilty on April 19 to one charge of “misbranding and adulteration of drugs in interstate commerce.”

Banca was one of the leading trainers at Yonkers Raceway when he was among dozens of individuals indicted in March 2020 as part of a widespread federal investigation into the doping of racehorses. As part of his plea agreement, Banca will forfeit $120,975.40 — with sentencing for the crime to take place on Sept. 6.

Investigators have reported that Banca was involved in doping from 2015 to 2020. The former year is noteworthy because it matches that in which the trainer rose to great prominence in the harness racing industry by tripling his win rate each year thereafter.

In the initial complaint, an FBI agent testified that Banca “misled and deceived state and federal regulators with respect to the distribution, purchase, and receipt of various misbranded and adulterated performance enhancing drugs, and the use of such misbranded and adulterated drugs to improve the performance of racehorses under Banca’s and others’ custody and care.”

The agent added that during a search of a Banca-owned property in Middletown, New York, just days before the criminal complaint was filed, FBI colleagues found “illegal substances and handwritten notes with instructions on how to administer these drugs.”

The complaint added that Banca worked closely with veterinarian Louis Grasso in the widespread doping scheme.

Jeff Gural, who owns Meadowlands Racetrack, told NJ Online Gambling in February that while he was satisfied to see a conviction of veterinarian Dr. Seth Fishman on two counts of “drug adulteration and misbranding, with intent to defraud and mislead,” he believed that evidence compiled by the FBI will prove that Grasso was the other key figure in the overall scheme.

Rene Allard, who had 42 wins at Yonkers in the first two-plus months of 2020 before the indictments — one shy of Banca — also has been banned from Gural’s tracks for more than five years. Grasso, Allard, and three others allegedly involved in the doping scheme are each tentatively scheduled to have their trials begin on June 27.

Jorge Navarro, Monmouth Park’s No. 1 trainer every year from 2013-19, pled guilty in August 2021 to a similar charge of “conspiracy to commit drug adulteration and misbranding with the intent to defraud and mislead.” Navarro was later sentenced to five years in prison and ordered to pay restitution in the amount of $25.8 million — or about three-quarters of his career earnings of $34.8 million.

Jason Servis, the other leading Monmouth Park trainer who was among dozens charged in 2020, has maintained his innocence. Servis’ trial date has been postponed until “the first quarter of 2023,” a judge ruled in February. Part of the reason appears to be that Servis is free on bond, while many other defendants are in jail.

Prosecutors have alleged that among the horses Servis drugged was Maximum Security, who was disqualified for interference after crossing the finish line first in the 2019 Kentucky Derby. Most of the other defendants who have pled not guilty are expected to be tried between May and September.

While the thoroughbred and standardbred horse racing industries have less overlap than casual observers might believe, a sentence handed down earlier this year revealed collusion between trainers of each breed.

Chris Oakes, a standardbred trainer, received a three-year prison term — the maximum sentence for the crime, to which he pled guilty — in March 2022 for doping not only his own harness racing horses, but also for supplying PEDs used by Navarro for his thoroughbreds. Gural, who had banned Oakes from his tracks well before the indictments, attended the sentencing in a U.S. Southern District of New York federal courtroom.

“I am glad I came, if for no other reason than to see how justice works,” Gural told The Thoroughbred Daily News. “I thought everybody did a good job and the judge understood the severity of the situation. It is a tragedy. These horses can’t talk for themselves. When I started this, I had friends who told me it was a waste of time, that it was impossible to catch these guys.”

But thanks to Gural’s determination — as well as his willingness to spend considerable funds, along with The Jockey Club, bankrolling the Five Stones investigative research team as it produced enough evidence to get the attention of federal law enforcement — it appears that Gural didn’t waste his time (or money) after all.