Atlantic City Gaming Revenue May Be On The Upswing, But Poker Is Still Out In The Cold

Revenue at Atlantic City casinos was up 3.2% in November, all but guaranteeing that the boardwalk city will see its first annual revenue uptick in more than a decade.

From 2006 – 2016, AC went from gambling Mecca to virtually washed up, with its gross gaming revenue falling from a peak of $5.22 billion to less than half that amount ($2.60 billion). And while this year’s modest gains will only undo a smidgen of the damage already done, it’s a decided step in the right direction.

Poker room revenue in New Jersey, on the other hand, has yet to find a floor. Dating back to 2011 — the earliest year that the NJ Division of Gaming Enforcement displays its published revenue reports — we see that poker is struggling more than just about any other gaming vertical, with little immediate hope of resurgence.

Unfortunately, poker revenue statistics from before 2011 weren’t available, so we can’t determine with certainty just how far the rabbit hole really goes. But based on Atlantic City table gaming trends we suspect that the decline of poker revenue from 2006 to 2017 was well over 50%. 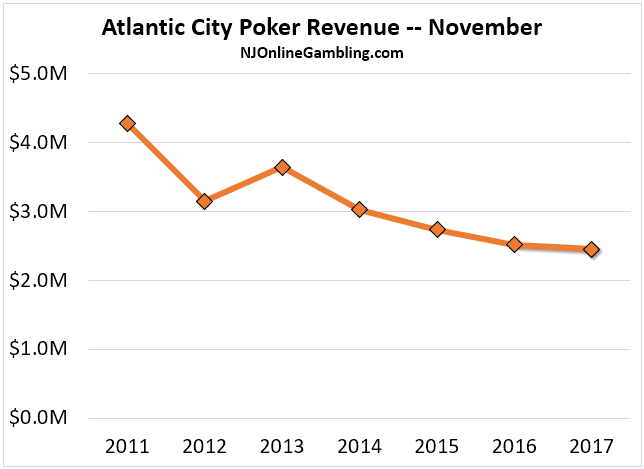 Notice that in all but one of the past six Novembers, AC poker room revenue has declined. And the one time that it improved in November 2013 can easily be explained away by the fact that Hurricane Sandy ravaged Atlantic City revenue the previous year.

However, recent full-year trends are not as optimistic. Whereas in 2016, poker room revenue only dipped by 0.3%, we project that Atlantic City will only generate $28.46 million from poker this year, representing a rather daunting 10.4% downturn.

Why did poker stumble?

There are two somewhat obvious, although not necessarily convincing, answers as to why live poker has suffered such a tumultuous downswing in the past half-decade.

The first point deserves some consideration, as Atlantic City has greatly consolidated its casino industry in recent years, down from 12 casinos in 2013 to seven presently. By extension, the number of poker rooms and tables are down precipitously as well.

Whereas there were eight rooms and 296 tables in 2011, that number has dipped to just five rooms and 207 tables presently. 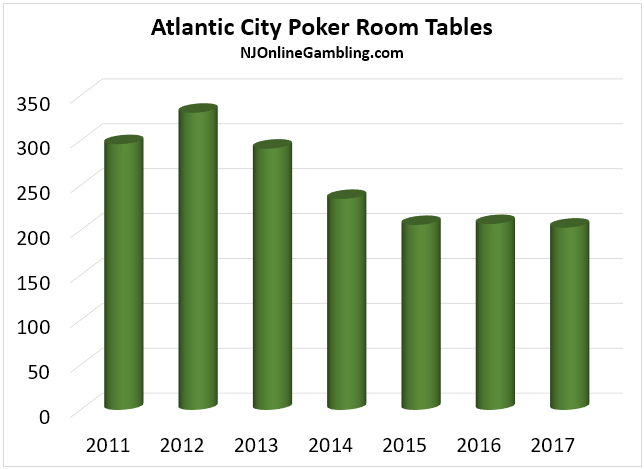 Given this, it would make sense that consolidation is to blame for the downturn. But it’s not that simple.

See, the consolidation process has been something of a saving grace for land-based casinos, and is one of the main reasons why the market has stabilized. Yet, the same cannot be said about poker, where revenue for most individual rooms has continued to hover around even or decline.

And because land-based revenue has slowly turned the corner, the second point — that the decrease in poker room revenue is a byproduct of Atlantic City’s overall struggles — doesn’t feel completely right either. If anything, Atlantic City revenue will be up in 2017, whereas poker revenue will dip roughly 10%, despite the number of tables holding steady.

No, it appears that the real problem is poker itself, which clearly is not resonating as well with casino goers as it has in years past.

To confirm this, we looked at the percentage of total casino revenue that poker has accounted for in recent years. The results were telling. 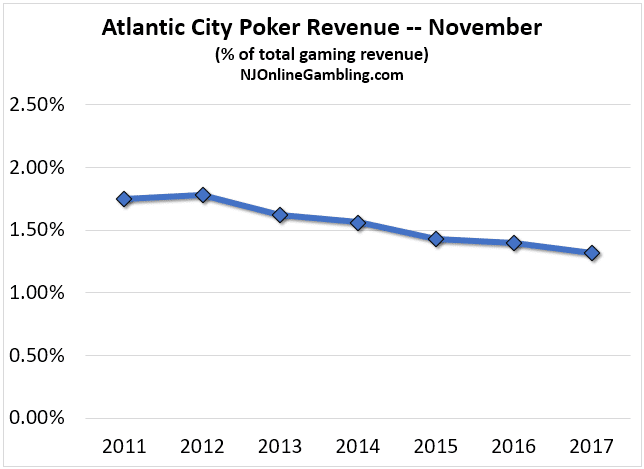 Thus, it’s reasonable to assume that the main reason AC poker has fallen off is simply declining interest.

That, and possibly that Delaware and Philadelphia area poker rooms are cannibalizing more poker traffic than other AC gaming traffic — but that feels like a bit of a stretch.

The movement away from poker is also apparent online. One can argue that online poker operators have an even more difficult time keeping their numbers up because of the low liquidity cap of the New Jersey market.

The situation should improve when NJ begins sharing liquidity with Nevada and Delaware (and possible Pennsylvania). But until then, the outlook is murky, at best.

Since 2013, when NJ online gambling first went live, online poker has accounted for a smaller piece of the revenue pie each and every year:

Granted, the divide has probably just as much to do with the momentum of casino than it does the disinterest in poker. But there’s little denying that today’s New Jersey gamblers are gravitating away from what was just 10 years ago, a very popular gambling pastime.