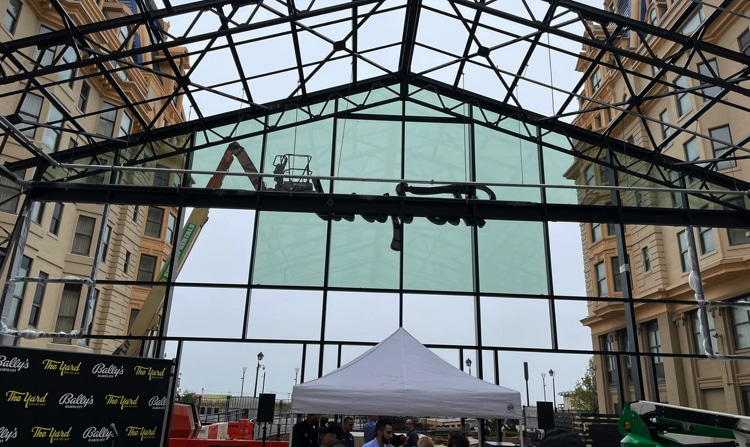 Still, there was some skepticism.

“This is a building that’s over 40 years old,” commission Vice Chair Alisa Cooper said at the time. “I don’t say that with any disrespect. It was opened in 1979. It’s a big building. … Is there money there … if you run a little short … in regard to the Atlantic City property?”

But the reassurances made to commission members that $100 million was committed to a massive upgrade bore fruit Thursday, when Bally’s executives played host to a “topping off ceremony” for The Yard, an indoor/outdoor beer garden to feature live music that will be heard by passersby on the Boardwalk.

Those who are lured in will note a gastropub menu, arcade games, and other attractions at The Yard. Venture inside a little farther, and the revolving bar near the fully refurbished hotel lobby will also be apparent. Most of the rooms, meanwhile, have been significantly upgraded.

The task of creating The Yard was passed from Atlantic City native and Bally’s Executive Vice President/Chief Marketing Officer Phil Juliano to his son, Paul, the vice president of operations for the company.

“The market research for me was rigorous. I visited a lot of beer halls in Philadelphia and New York, so that was pretty cool,” the younger Juliano joked before an audience of media members and dozens of employees. “We want this place to feel relaxed, casual, and completely unpretentious. You can come from the beach and just roll in, come for dinner or lunch, or stop by for a drink.”

Phil Juliano said that the prime address for Bally’s will be validated by the new concept.

“Park Place and Boardwalk — you cannot have a rundown spot representing that famous address that the world knows about,” Juliano said, referring to the two most expensive properties in the iconic board game Monopoly. “As you walk through the building today, you are seeing things that contradict, or are certainly different from, what you remember Bally’s to be even a year ago.”

The ribbon-cutting ceremony for The Yard is slated for May 26, just ahead of Memorial Day weekend. Phil Juliano said that the bar will be open by then, and The Yard should be fully functional by July 4 weekend — or perhaps a week before. 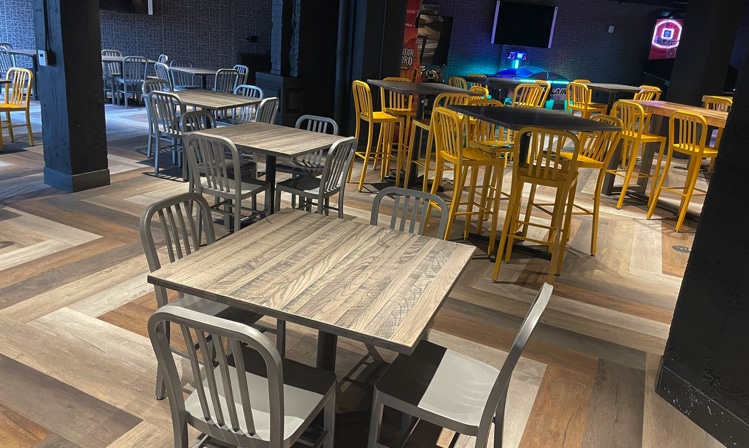 The revolving Carousel Bar will be ready for the holiday weekend customer, said Bally’s General Manager Mike Monty, adding that the refurbished rooms also will be open to visitors. Fireworks on the beach also will be offered on weekends, Monty added, “which has not occurred here in recent memory.”

After the ceremony, Monty told NJ Online Gambling about the company’s investment, “We have that full $100 million committed, and we are well on our way to reaching that number.”

He added, “We’re growing as fast as any property on the market on a year-over-year basis. Our table games are strong, and we still have room to grow with our slots product. It will take some time for that brand resonance to occur, but we think we are on our way. The mood here is ‘born to entertain,’ which is what Bally’s used to be. There’s no reason we can’t be a premier gaming destination.

“What we are hearing a lot is, ‘Bally’s — my aunt used to go there, or my uncle.’ There were customers who stayed away before we made this investment.”

The renovation of 750 new Bally Tower hotel rooms and an upgrade of the high-limit table room, along with numerous new slot machines, are among the other features of “the new Bally’s.”

Nowhere to go but up

Bally’s ranked last in on-site casino gaming revenue at $140.7 million for 2021, per state Division of Gaming Enforcement figures — within striking distance of Golden Nugget and Resorts, but not of annual market leader Borgata ($606 million). In the first quarter of 2022, Bally’s trailed the field once more, again just behind Golden Nugget and Resorts.

Former Bally’s General Manager Nick Polcino conceded last fall that “the property was depressed. A lot of folks didn’t want to come here because it was dirty.”

Caesars Entertainment also owns the Caesars and Harrah’s casinos in Atlantic City, and the perception was that those properties took precedence over Bally’s in terms of maintaining a suitable standard of operations. The Caesars company has since purchased the Tropicana to replace Bally’s as a third property in the nine-casino market.