The long-awaited, and merely partial, opening of American Dream Meadowlands on Friday proved to be, well, unconventional.

But given the project’s quirky history — supermodel Christie Brinkley co-hosted a press conference for its predecessor more than a dozen years ago — perhaps that was to be expected.

Let’s start with the fact that, while there was some internal panic about traffic jams, the local roads looked like business as usual just past the waning of the morning rush hour.

It wasn’t clear whether anyone other than those who paid $39.99 or $49.99 would be able to get inside to see the opening of the indoor amusement park and the ice skating rink. But as it turned out, John and Jane Q. Public not only could park for free and walk in, they could obtain a wristband for all the rides for free, too.

The official opening was to be at 10 a.m., but early birds got an early entrance as workers put on various finishing touches. The “soft launch,” meanwhile, proved to be just that — it wasn’t until 11 a.m. that the modest crowd was treated to the singing of the national anthem.

A little past noon, SpongeBob SquarePants led a local high school marching band around the amusement park perimeter. The band played on … and on, even as New Jersey Governor Phil Murphy waited to make some remarks to the media on the second floor.

The Blaze’s Monster Truck Rally “kiddie ride” appeared to be the first of dozens of rides to open on Friday morning. Not too long after, the Nickelodeon Slime Streak rollercoaster was up and running. I rode it, and shared a video of others riding it on Twitter:

I’m too old for this Nickelodeon Slime Streak rollercoaster at American Dream Meadowlands but I rode it anyway. If you’re more than 6 ft tall or 200 lbs, it’s a tight fit. Don’t ask me how I know pic.twitter.com/oFpkW2k7re

The “Streak” is a moderate-level rollercoaster — no upside-down adventure there. Murphy, his wife Tammy, local state Senator Paul Sarlo, and Assembly Speaker Craig Coughlin soon climbed aboard a more thrill-inducing ride called the “Shellraiser,” with a 12-story drop, before Murphy made his remarks.

Only about half of the dozens of rides had passed state inspection as of opening time, with signs reading “CLOSED FOR TESTING” in front of key rides such as The Shredder, Timmy’s Half-Pipe Havoc, and Sandy’s Blasting Bronco. 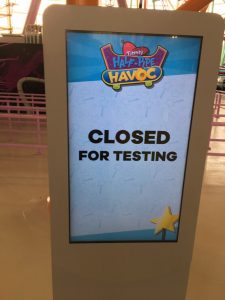 “Havoc” had passengers, of sorts — test dummies — on test runs on Friday morning.

State officials issued a temporary certificate of occupancy on Thursday night, ensuring no delay in the partial opening.

Nothing says “American Dream” like this giant Statue of Liberty holding a gnawed-on chocolate bar here in the Meadowlands pic.twitter.com/oJrSYkFDGm

What’s next for American Dream?

What happens Saturday and Sunday? Signage indicated that the ice skating rink is “free all weekend,” but the $39.99 and $49.99 pricings for the amusement park were still listed.

Given that not all the rides are ready yet, it seems like a decent gamble for locals to check out the site. Parking was free on Friday, although that will rise to $3 to $6, depending on length of stay, eventually.

Then-Governor Jim McGreevey proposed adding an entertainment and retail center to the Meadowlands Sports Complex when he took office in 2002, and a year later the Xanadu project was approved.

Triple Five, the third developer, took over in 2011 and built an indoor amusement park and water park complex, with the latter expected to open on Thanksgiving weekend. The indoor skiing area is to open in December, followed by more than 1 million square feet of retail to open in spring 2020.